Since I was born and raised in Oregon I am partial to the Oregon craft beer scene. Every time I go back to the west coast I have to pick up a sixer of some Oregon beer, be it Rogue, Deschutes, whatever I can get my hands on. Whenever I can find some Oregon brewed goodness in my neck of the woods I jump at the opportunity to taste the deliciously made beer. 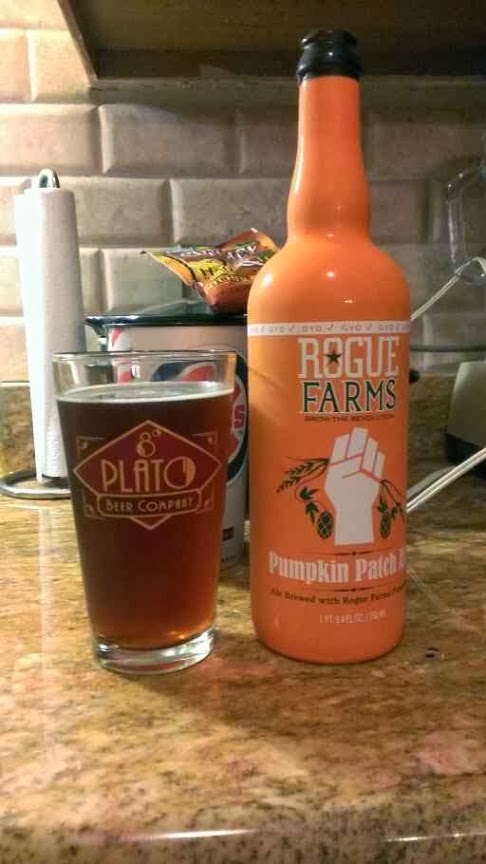 When the month of October was upon us I went into my favorite local beer store, 8 Degrees Plato, for what seemed like a regular New Beer Thursday. I was making my mixer sixer when out of the corner of my eye I saw the 750mL orange bottle of Rogue Farm Pumpkin Patch Ale. I am a fan of the pumpkin beers so I just had to try it out. I decided that I would purchase it and wait until Halloween to indulge in the pumpkiny goodness that is a  delicious pumpkin beer.

On Halloween I was handing out candy and transferring my home brew from stage 1 to stage 2 fermentation, all while I was trying to taste some delicious beer. When I opened the bottle of Pumpkin Patch Ale I remember it smelled very similar to a pumpkin pie when you pull it out of the refrigerator. I was getting excited since I LOVE pumpkin pie. I poured the Pumpkin Patch Ale into my 8 Degrees Plato glass and noticed the color of the beer was a brownish copper with a small off-white head. Along with the pumpkin smell there were hints of spices which could include some cinnamon. The first taste was as delicious as the last taste. I was able to enjoy this beer in between kids knocking at my door screaming Trick-or-Treat. The beer has a very noticeable pumpkin flavor with a small hint of the spice, I thought it tasted like pumpkin pie. I would give this an 8/10 and would pick this beer up again when it comes available.
Posted by Unknown at 9:02 AM