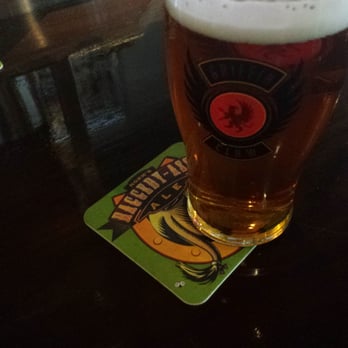 "What would you say to a nice beer, Normie?"
"Going Down?"

Man I love cheers, and my favorite character has to be Norm. He is full of quick wit and distaste for work, just like me! And Norm always loved a nice cold brew, just like me. Even though Norm's Raggedy Ass IPA isn't based on Norm from Cheers, it is still a very good beer.

It is crazy to think that a couple of years ago craft beer was difficult to come by when I would go to sporting events. You were always stuck with drinking Bud, Miller, or Coors. Now, depending on the venue, there is a wide variety of beers being offered. The Palace of Auburn Hills is no different. My new mother-in-law was kind enough to buy me tickets to the Detroit Pistons vs Portland Trailblazers game. It was on a Tuesday this past week, so I didn't get too crazy, but it was still a good time. My wife, Ashley, and I go to the game early to watch warm ups and to beat the crowd of 11 people at the game. I swear, half of the fans were Trailblazer fans and only a quarter of the Palace was filled. I tried to order a beer from my seat, but the craft selection wasn't that great and craft was only served in bottles.

During halftime I went to the concourse to see what was on tap. I was pleased to find a good selection of Michigan craft brews available. One of my favorite MI breweries as of late is Griffin Claw Brewing Company, which is located in Birmingham, MI. On draft at the Palace they had Griffin Claw's Raggedy Ass IPA, so I grabbed me a tall cup of deliciousness and went back to my seat to enjoy.

Norm's Raggedy Ass IPA is very good. I am partial because I love IPAs. I enjoy the bitterness and hoppiness of the American IPA style. This beer poured clear golden copper in color with a small white head that left some good lacing around the cup. The smell of the beer is an intoxicating mix of citrus and pine hops and bready malts. The flavor is a bit hoppier then the smell indicates but is well balanced with an aftertaste of bready malts. Being able to enjoy this craft beer while watching my Trailblazers beat up on the Pistons was a real treat.