Every winter Bell's Brewery comes out with a deliciously hopped beer known as Hopslam Ale. This winter is no different. On January 14th, 2015 Hopslam Ale was released throughout Michigan. As soon as the beer arrived in stores and was placed on the shelves, it was gone. 8 Degrees Plato notified their followers via Facebook and Twitter of the arrival at 3 PM, stating there would be a limit of one 6-pack per customer. By 5pm they were sold out. 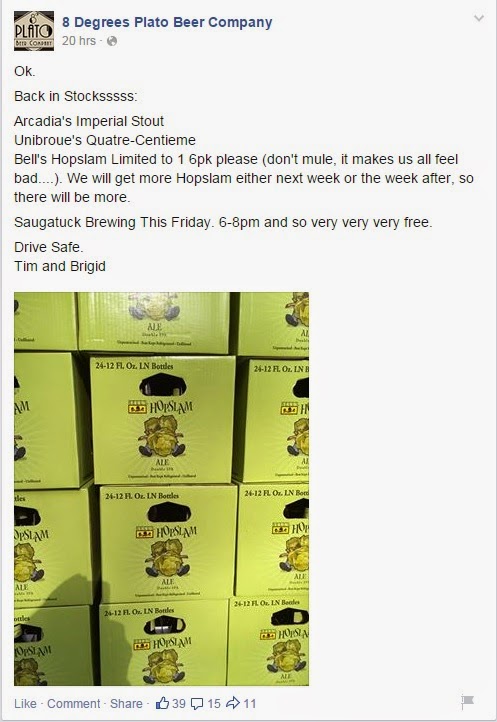 But don't worry Hop-Heads. This was just the first wave of release for this years batch of Hopslam. There will be another distribution in the next couple of days. If you keep your ears ground you will be able to snatch up a 6-pack for yourself. If you are out and about in the Ferndale area I know of at least one bar that has Hopslam on tap, for now. M-Brew is located at 177 Vester St near the heart of downtown Ferndale. It is an excellent bar stocked with many Michigan Beers and classic arcade games. Unfortunately for me, I wasn't able to get to 8 Degrees Plato in time, or any other craft beer store to get my hands on a 6-pack of Hopslam. I was also too tired from working out last night to get my ass to M-Brew. Maybe tonight will be different. I hope M-Brew hasn't run out already.

For those of you who don't know about Hopslam let me give you some information that comes from the Bell's Brewery website.

"Starting with six different hop varietals added to the brew kettle & culminating with a massive dry-hop addition of Simcoe hops, Bell's Hopslam Ale possesses the most complex hopping schedule in the Bell's repertoire. Selected specifically because of their aromatic qualities, these Pacific Northwest varieties contribute a pungent blend of grapefruit, stone fruit, and floral notes. A generous malt bill and a solid dollop of honey provide just enough body to keep the balance in check, resulting in a remarkably drinkable rendition of the Double India Pale Ale style."

Good luck out there craft beer drinkers. Let me know where you find this years Hopslam Ale.
Posted by Unknown at 9:53 AM