Though Hopslam has been difficult to find, to say the least. I called five different craft beer stores in my area and they all had similar stories. SOLD OUT! One store told me they received their order Wednesday at 5:55 PM and they were sold out by Wednesday at 5:59 PM. Can you believe that! But don't worry hopheads, these stores will be getting another order in this coming Wednesday (1/17/2015).

Bell's Brewery has many other great beers in there line up. I was fortunate enough to have my beer dealer, Frisky Business, grabbed me a six pack of Mercury. Mercury is part of The Planet Series by Bell's Brewery.

The Planet Series started back in August 2014 and will end in July 2015. They are being released in the order of Holst's piece, Mars to Neptune. Mercury was released in December, and the Jupiter will be released in February. Hopefully Frisky Business will get the hook up in February for Jupiter. 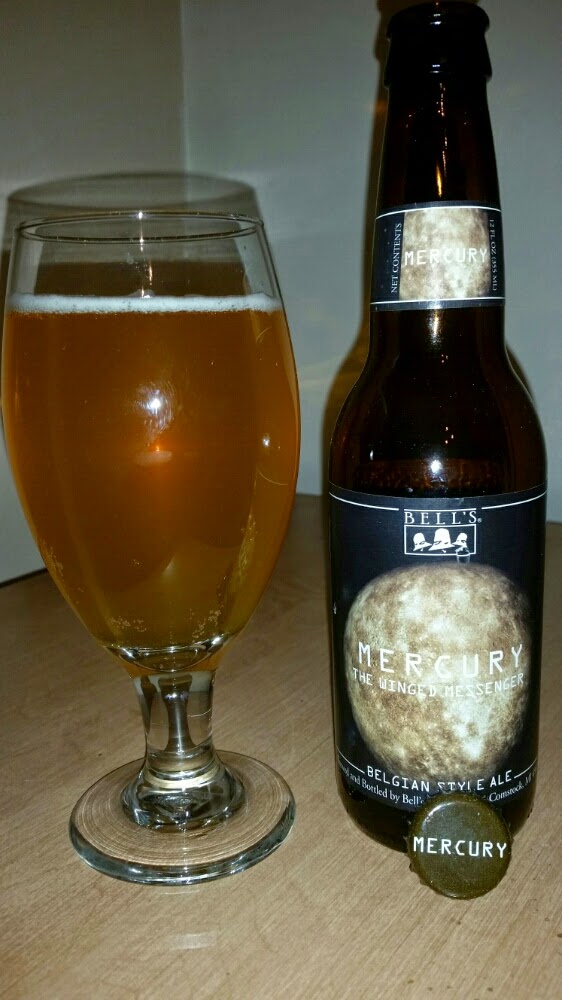 As I sit at my basement bar preparing to record the first episode of Slurred Words with my friend Nick Samassa I place two bottles of Mercury in front of us. After explaining to Nick how the podcast will go, I start recording. After introductions we officially start Slurred Words by popping the top off of the first bottle and pouring it into the snifter. Mercury pours with a straw like color with a slight haze. There is a bit of small white head, which dissipated fairly quickly. The aroma is a bit sweet and funky, giving off a kind of wheat type smell. The taste is sweet and smooth with light carbonation. There are subtle notes of citrus, pale malts, and spice. What we have here is a typical Belgian style beer, Bell's did not seem to try to put any special twist on the the Belgian Single style. If I can find another six pack, I would grab it. I enjoy the Belgian style and Mercury didn't disappoint to deliver.

Pat Finley: Who wants to tell us the lesson we learned here?
Roy: Don't put twinkies on your pizza!
Posted by Unknown at 8:22 PM