It was Oscar Sunday yesterday, what beers took home the Academy Award?

I don't typically watch award shows that don't honor the type of movies that I enjoy, for example, Guardians of the Galaxy being snubbed for Best Picture. While checking in and out of the Oscars last night I got the impression that everyone was just going through the motions. NPH is great at anything he does, but I just wasn't feeling his enthusiasm with the delivery of some of his jokes. He even went as far as having that guy from Selma read the punch line to one of his jokes to see if it would land better laugh.

Out of the seven movies nominated for Best Picture I have seen 2 1/2. Of those 2 1/2 movies I was a fan of two of them, one of them I was so un-interested in halfway through I had to turn it off (The Grand Budapest Hotel). The thing that bothered me is, a film like Guardian's of the Galaxy has a little of everything for everyone. I took my wife to see it on our honeymoon, she isn't the biggest comic book fan, and I had no idea what to expect since GOTG was fairly unknown to me. We both left that theater happy that we took the time on our honeymoon to see it. I haven't seen the film that won Best Picture, Birdman. I have heard rave reviews about it though. To me, its a true to life tail of Michael Keaton and that is why everyone is connecting and enjoying the film. Keaton has the 2nd best portrayal of Batman since the caped crusader hit the silver screen. Since hanging up the cape in 1992 he went on to a lackluster career, in my opinion. Most recently having a roles in Need for Speed and Robocop before landing Birdman.  I am not trying to shit on Keaton and his body of word, as much as the Academy for shitting on GOTG for Best Picture.

With that being said. On to the beer. 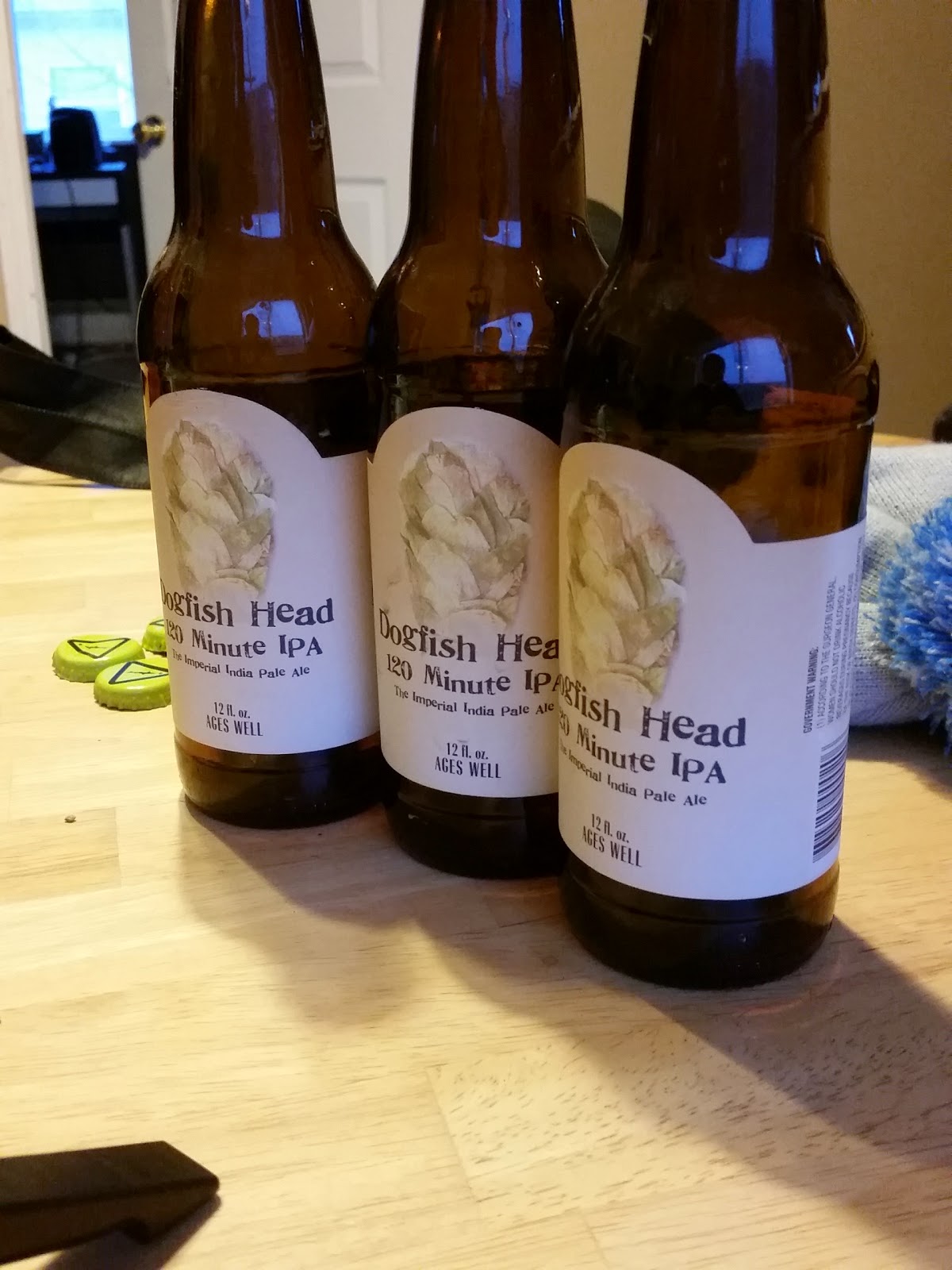 While recording the latest episode of Slurred Words, which should be posted by Thursday, I was treated to one of the finest beers I've ever tasted. Mark, my guest on Slurred Words, brought with him three bottles of 120 Minute IPA by Dog Fish Head, vintage 2012. In the podcast he regales us with the story of how he came about these fine beverages. I think everyone will agree that Dog Fish Head is a fine brewery that is constantly pushing the limits of our taste buds with their off the wall beers and collaborations. To some, Dog Fish Head brewing can be consider a Mecca. I hope to one day make the journey to the Brewery in Delaware, dragging my wife along with me for the ride.

The 120 Minute IPA has a range of ABV from 15-20% coming in at 120 IBUs. To Hop Heads, it is considered the Holy Grail. The 120 Minute is boiled for two hours while being continuously hopped with high-alpha American Hops, then dry-hopped daily in the fermenter for a month and aged for another month on whole-leaf hops. With such a high ABV one would expect an strong alcohol taste. I believe, due to the aging of this particular bottle of 120 Minute the bite wasn't as present in the forward taste, as it finished there is definitely a warming sensation brought forward by the high ABV content. There is a good solid hoppy flavor to it, but to me it was more mellow then forward with the normal hoppiness. This could be due to the aging of the beer as well. Overall, I really enjoyed drinking this beer and am glad I can say I have had the 60, 90, and now 120 Minute IPA from Dog Fish Head.