This past weekend my oldest brother and I traveled out to Phoenix to celebrate our middle brothers wedding. We decided to travel early Thursday morning in order to arrive with enough time to get into some mischief. Once we arrived it was business first, we picked up our tuxedos from the Men's Warehouse and dropped our luggage off at our Mom's house.

The first stop on his bachelor party was a Cactus League Spring Training game between the Texas Rangers and the Chicago White Sucks, sorry I mean Sox. We spent a little extra money in order to get into the Home Run Party deck, but to be honest it wasn't much of a party. They only served beer in bottles, and the beers were warm because their refrigerator went out the night before. On top of that, they only took cash. To top it all off, American Express reserved all the fucking tables under the tent. We got our meal that came with the ticket and found a spot to watch the beginning of the game, boy the sun was beating down on us.

After we finished the meal and our two drink tickets we made our way out of the Party Deck in search of the real party. Lawn tickets are where the party is at.  In the outfield there is a lawn were people come to sit on the grass and enjoy the game, this is where we ran into my brothers friend Mike and his family. He was giving us the down low on the Old Town Scottsdale scene. See that evening we were going to spend the evening in Old Town Scottsdale in order to hit up a couple bars, maybe get some impromptu tattoos who knows...it could get crazy.

Once the game was over we headed off to the hotel in Scottsdale, but first we needed some hotel warm up beers. For this, we stopped off at a place called Total Wine & More. They had an excellent selection on beers, liquor, and wine. Topping it all off there was a free tasting with a local brewery. The tasting was for the Phoenix Ale Brewery, which has a tap house right by the airport. They had three beers to taste Camelback IPA, The Keeper!, and Watermelon Wheat Ale. The guy pouring the beers was real friendly and explained each beer and the idea being The Phoenix Ale Brewery. My favorite was the Camelback IPA, so we grabbed a six pack of cans to go with our other selections and continued on our way to Scottsdale.

Once in the hotel we poured ourselves a glass of Enjoy by 3.14.15 in honor of Pi Day. My brother had picked up two growlers of the Stone Brewing Co. but by the time we tasted it, there was a bit of funkiness to the beer. I think it was skunked from sitting in his car for too long, going from cold to hot to cold again. We didn't let that define the night though, we continued with the Camelback IPA before heading down to the hotel bar for our last pre-dinner drink.

That was a very fun night. Scottsdale has some really cool bars, and for a Thursday night the bars were hopping. There was some awesome live music going on that night. There seemed to be a lot of people in Scottsdale on Spring Break, which was odd to hear. Who the fuck comes to Arizona for spring break? We ran into a group of people that were on Spring Break from the University of South Dakota, so that makes sense. 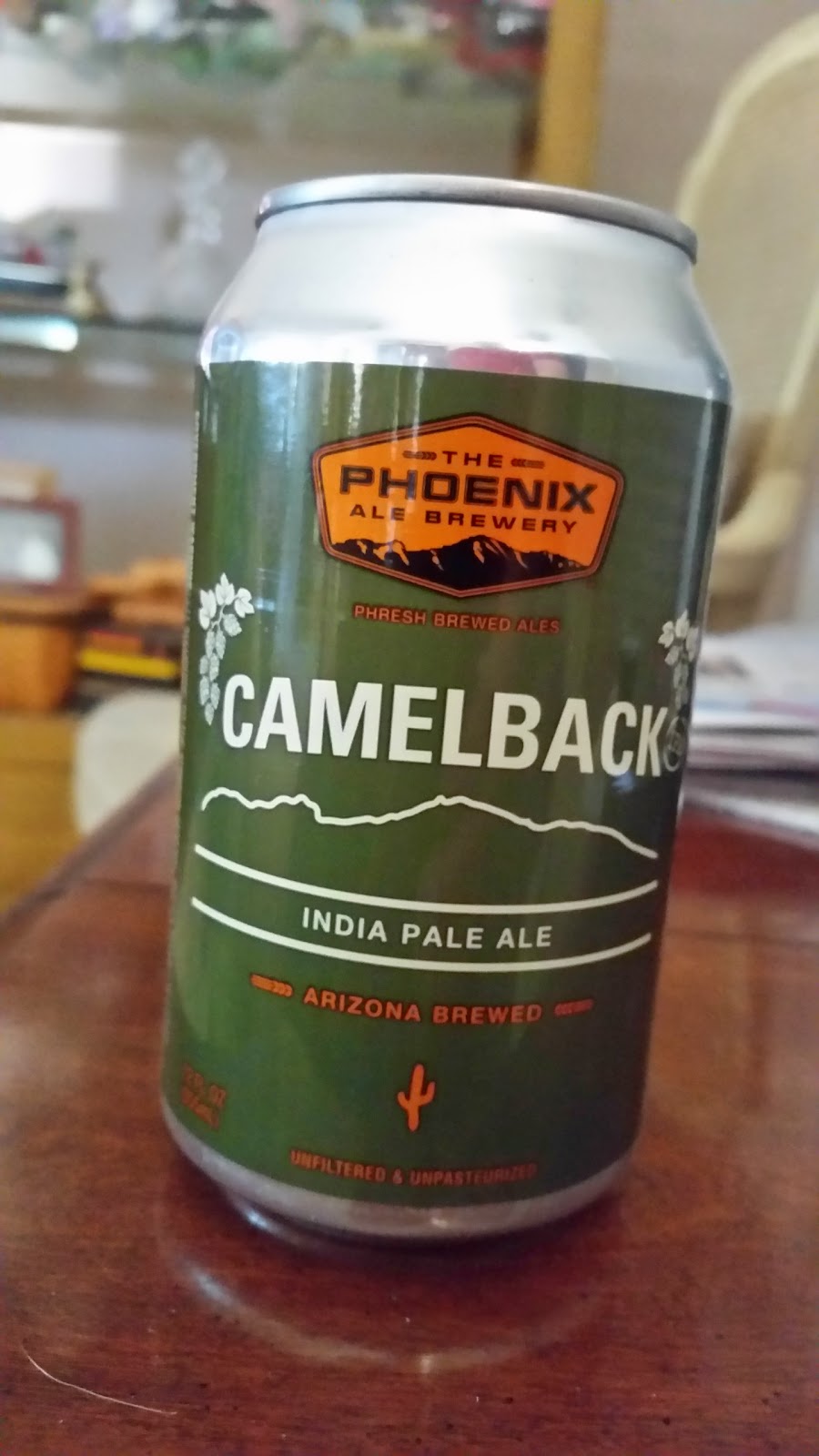 The Camelback IPA is named after the Camelback mountains in and around Phoenix. This IPA has a nice hoppy aroma with a solid base of hops as it hits the palate. This beer pours with a golden straw color and medium head. There is a balanced carbonation bite to this IPA. It is an enjoyable can of beer on a sunny day in Phoenix. In fact, I finished the six pack on my parents back porch while enjoying the Phoenix sunset. I was unaware of the Craft Beer movement happening in Arizona. I hope to visit The Phoenix Ale Brewery next time I travel to visit my folks. I believe they have a shuttle service to and from the airport, which is very convenient.