There are rare times when drinking before noon can be viewed acceptable. According to a random statistic that I just made up, 43% of people find it acceptable to drink before noon. The bulk of the 43% consist of fraternity members, party animals, and alcoholics. You maybe asking yourself, isn't there an awesome Venn Diagram that correlates the relationship between the three type of people you just described, and the answer is YES! 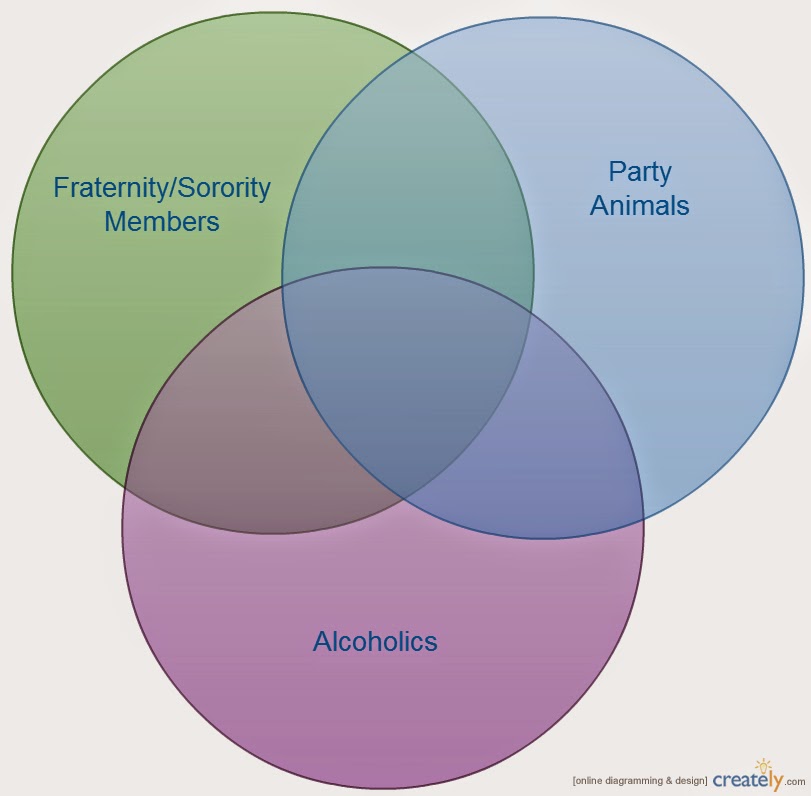 The majority of the 43% feel that drinking before noon is only acceptable in certain situations. For instance, tailgating the Detroit Tigers Home Opener is basically an official/unofficial holiday in Metro Detroit. Thousands of people gather around Comerica Park to drink before watching their beloved Tigers take the field for the first time at the start of the season. I myself, have gone down to tailgate for this event. In the three times taking work off to tail gate, I have only had tickets for the actual game once. If you don't have tickets once the game starts people usually disperse to neighboring bars to cheer on the Tigers and continue to drink.

Some of my favorite stories come from day drinking. A great time was had during my last Alumni golf outing last July. My neighbor is a brother of mine from school and he was gracious enough to offer me a ride to the golf course for the alumni outing. I am not a morning person, so I was woken up to pounding on my front door by my friend to get the hell up and get out there. In about three minutes I was dressed and walking out the door with my golf clubs. As I rushed to put my clubs in his car and jumped in the back seat he handed me a cup with what I thought was water. I took a large gulp and instantly realized it was not water.

As we were driving to the golf outing me and our buddy were drinking some G&T, they surprisingly look like water, and stopped for a case or two of beers for the golf course. As we arrived to the golf course we saw the group of 30+ Alumni gathering for donuts and to pay the donation to the house. We get in our groups and get our clubs on our golf carts. By this time we are working on our second cup of G&Ts and feeling pretty good. The time is 8:30AM. By the end of the second hole we were done with that G&T and onto our beers. Long story short, I did not finish the 18 holes of golf but made it to the lunch in after the golf. I smashed on some food that helped me become human again. I can't wait for the next alumni golf outing.

Other reasons, besides sporting events, for drinking before noon can be travel. For instance, if you are traveling from China to Detroit your flight could stop off in Japan and Seattle before its final destination of Detroit. That gives you three airports and three opportunities to grab a beer before your final destination. I believe this is where the statement, "It's 5 O'Clock Somewhere" comes from.

Drinking at the airport is another story. When you are in an airport there is no time zone. The only thing that could keep you from drinking is it being TOO early in the morning or TOO late at night. As JoePa and I were traveling back from Nova Scotia we arrived from Nova Scotia to Toronto around 7:30AM. We were obviously hungry and sat down at a bar for some breakfast and some early morning drinks. We were shocked to hear that we could not order drinks until 8AM. Canadians of all people had a time frame that didn't allow drinking. This was crazy, but we scarfed down some food and had our beers delivered to us at 8 O'Clock on the dot. When asked, "why are you drinking this early in the morning" all I could come up with was, "why not?".

What are your thoughts on day drinking and drinking before noon? Have you ever had those early morning Airport Beers or early tee time beers? Day drinking is so popular that Alan Jackson has a song about it, "It's Five O'Clock Somewhere" Check it out below.