Since March I have been spending a lot of time in Minnesota for work. In that time I was able to visit Surly Brewing Company, Big Wood Brewery, Hammerheart Brewery, and Indeed Brewery and have been pleasantly surprised at the quality of craft beer being produced in Minnesota. On my last trip I was able to finish work early on Friday and visit another brewery before heading to the airport. This time I decided to visit a placed called Bent Brewstillery in Roseville, MN.

Bent Brewstillery is located in a warehouse area right next door to a flooring company. When driving by the warehouses, don't blink because you may miss the chalk board sign that informs you that Bent Brewstillery is in that section of warehouses. As you enter the parking lot you can see the tap room patio. The entrance is through a warehouse garage door. If you have ever been to B. Nektar in Ferndale, MI that is what their Brewery and Tap room remind me of.

The tap room looks like it can hold around 150 people and an extra 25 or so on the patio. They have two TVs over the bar and 1 more around the room. There is a gate that separates the brewery and the tap room, shrouding the view into the brewery is some Bent Merchandise. They have a good selection of T-Shirts, Jackets, and hats for purchase along with branded growlers and pint glasses.

As I bellied up to the end of the bar a very kind bartender greeted me with a smile and a menu, I believe her name was Lisa.After a quick look at the menu I decided to order a sampler flight of  beers. While waiting for my flight from Lisa, I started a conversation with another patron at the bar, Jerry. Jerry works at the flooring company that neighbors the brewery. He was able to give me a run down on the brewery and also recommended his favorite beer, the Ol'Guerrero Barrel Aged Chilean Double Stout.

According to Lisa and Jerry, the building that now houses Bent Brewstillery used to be another brewery/tap room called Pour Decisions. The owner of Bent Brewstillery used to be a home brewer with a NASA Engineering problem. As his home brew skills improved he started guest brewing at Pour Decisions. Eventually he decided it was time to retire from NASA and put his money where is passion was, brewing. He bought the majority ownership of Pour Decisions and started Bent Brewstillery, keeping the same head brewer and facility. During my visit Jerry pointed out the head brewer, the owner, and the owners wife. There is a very welcoming atmosphere to Bent that was very enjoyable.

I asked Lisa where the name Bent comes from. There are two working theories currently on the name. According to the owner the name Bent is because they bend the rules of a normal brewery because they also distill liquor. According to the owners wife the name Bent is from an inside joke. Whatever it is, Bent Brewstillery quickly became one of my top breweries in Minnesota. Bent has two things that many of the other tap rooms I visited did not have, food and TV. I know you are supposed to make conversation and that is the idea behind the no TV policy that many tap rooms have. Fortunately, I was able to make some good conversation with Jerry and Lisa, but just having a TV makes it easier for a single to enjoy their time in the tap room. The food at Bent is only frozen pizza, but its better then nothing. While I was there they also had a food truck outside.

The four beers offer on the flight are as follows: 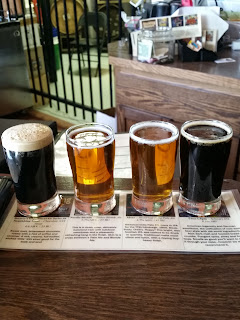 Bent is not only a brewery but it is also a distillery. The current spirit that they are selling is their Gunner Ghost Gin. If it was whiskey I would have purchased a bottle for my brother's Whiskey blog. I didn't taste the liquor but from what Jerry and Lisa say, it is a good Gin. According to their website, they are aging their Kursed Single Malt Whiskey. If I travel back to Minnesota at a later date the plan is to visit Bent Brewstillery.

Overall, Bent Brewstillery was a great idea before heading to the airport. If you are in the Minneapolis area and want to try some good beer, check out Bent Brewstillery and Jerry's favorite beer, the Ol'Guerrero.