As I sit here looking to download my latest round of podcasts I scroll by ESPN: Bill Don't Lie and The B.S. Report. Two podcasts featuring my favorite sports writer. He captured my attention when my friend Myers told me about The Big Book of Basketball

by this writer, Bill Simmons. This is by far, my favorite sports book and one of my favorite books of all time. After reading his book I was ready to see what else Simmons' had done. That is when Grantland came to my attention. The way the writers on Grantland mix entertainment and sports was the inspiration for the way I write my beer reviews.

Hearing that Simmons will no longer be working for ESPN worried me. Would Bill still be doing the B.S. Report? What about his new podcast all about the NBA cleverly named Bill Don't Lie? The last episode of the B.S. Report was released on May 5th, 2015 according to the Podcast Republic app on my phone. Where has Bill Simmons gone? Will he continue to podcast? Maybe he will take some time off of sports writing and write a pilot for the rebirth of Cheers? Maybe he will go back to writing for Jimmy Kimmel, or maybe he will luck into a front office job for an NBA team like the Celtics or the Clippers. Either way, I hope that it wont be too long before Simmons releases more material.

I am seeing these articles saying the other major sports networks are not interested in hiring him. I don't know about you, but I would watch a sports network run by Bill Simmons. Grantland  is proof that Simmons can build an amazing organization. Will Grantland  employees loyal to Simmons stay once he is gone? 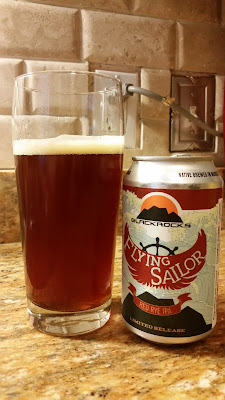 I am fortunate enough to have amazing friends who have amazing taste. One of these fine people I know through my oldest brother Matt. Matt introduced me to Kyle while he was in town to hang out. He is the person who introduced me to B. Nektar Meadery. While Kyle was up in the UP he was kind enough to pick up some limited release beers from a local brewery called Blackrocks. In order to get me the beer we used my brother as a semi parcel service. Unfortunately, the beers didn't arrive until I was leaving for my work trip to Brazil.

Now that I am back in the great United States I have a chance to sit back, relax and enjoy a beer. The Flying Sailor Red Rye IPA is a delightful combination of light and hoppy flavor. This beer was brewed with Falconer's Flight hops and rye malt.It pours with a small white head and an amber color. The nose is very hoppy forward like any good IPA should be, in my opinion. This beer is very refreshing and enjoyable while relaxing on my patio playing fetch with my puppy. If I could get my hand on a six pack or two, I would for sure.
Posted by Unknown at 8:36 PM