We live in an age where growlers can be ordered over the phone and delivered straight to your door, thanks M-Brew. Where being in four different fantasy football leagues is acceptable. And where comic book movies exist and kick ass! On this, the eve of the NFL season opener, I am able to sit down and tinker with my fantasy football lineups, enjoy the Avengers on FXX, wait for my favorite TV show to premier, and enjoy a good bottle of beer.

Tonight is the premier of The League on FXX. The League follows a group of friends and their fantasy football league, believe me shenanigans ensue. Ever since the show premiered back in 2009 I have hoped to be apart of a fantasy football league with the same level of shit talking and tom foolery that is portrayed in the TV show. This year, I think I am finally apart of that league, thanks to my buddy Armstrong. Talking smack is one of my favorite things, today it maybe called "trolling", whatever its called I do a lot of it and I need a team to help back it up.

I do not have that team this year. My draft wasn't that great. I picked Lev'Veon Bell in the 1st Round and he is suspended the first two games. My backup RBs are Mark Ingram and Doug Martin. I have Doug Martin in three of my four leagues hoping that he comes back strong this season and makes me look smart. The team doesn't get any better at the Wide Receiver positions. I have Dez Bryant, Davente Adams, Nelson Agholor, Marvin Jones, and Larry Fitzgerald. At the Tight End position I have former Bear, Greg Olsen. Rounding out my roster I have Sam Bradford at QB and Teddy Bridgewater as his backup.

The starting lineup for the first week right now is as follows:

Bill's Football Report is going up against Saskatoon Sausage Slammer in the week 1 matchup. The preview has me losing with a score of 87 to 81. Lets hope the preview is wrong. 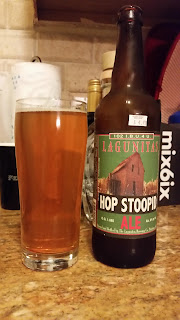 Hop Stoopid Ale poured from a 750 ml bottle into a clean pint glass. It poured with a rusty orange color and almost no head. It has a very grape fruit and floral nose. The flavor is a little darker then I expected, but it also had a grape fruit hoppy flavor. The feel is very melow, there isn't a harsh biting feel to it, which was enjoyable.

Overall, this beer was a nice way to wind down while enjoying some good TV programming and tinkering with my fantasy football lineups. If you enjoyed the fantasy football talk please join the conversation on twitter @BillsBeerReport. This may become a reoccurring segment during the football season.