Living in Michigan spoils you when it comes to the craft beer boom. There are hundreds of brewpubs and micro breweries and even more still applying for the licensing. Its always fun to travel around and try different beers from different breweries. One of the cool things that comes with writing a beer blog and doing a beer podcast is that when you travel people want to show you how cool the craft beer scene is where they live.

The last trip my wife and I took was to go visit our friends who live outside of Cleveland in Lakewood, Ohio. I know what you are thinking, there can't be anything good coming from Ohio. There is a great craft beer scene in an area called Ohio City. Saturday night our friends, Jenny and Aaron, decided to take us on the town and show us all that Ohio City had to offer. 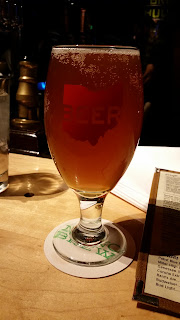 Ohio City, located just west of Downtown Cleveland and the Cuyahoga River, sits at the center of the City's Near West Side. Home to 9,000 residents, Ohio City is a complete urban neighborhood that can meet all your needs. The area is jam packed with restaurants and bars offering a variety of savory food and flavorful beers. The drive from Lakewood took about 15 minutes and our first stop was Great Lakes Brewing Company.

When we arrived around 7:30 the brewery was packed and there was an hour and half wait to get a table. Instead of sticking around for beers while we waited we decided to try a brewery that came highly recommended by Stephen Johnson of Motor City Brew Tours, Nano Brew Cleveland. Located on W 25th St and right around the corner from Great Lakes Brewing company it was an easy walk. Of course, Nano was packed too. Fortunately, we were able to grab two seats at the bar for out ladies while Aaron and I were left standing. 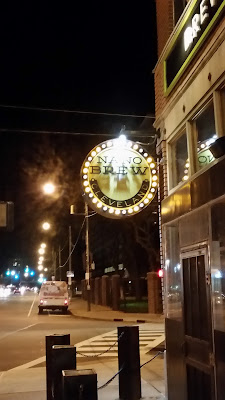 Nano Brew Cleveland had a very hip scene equipped with a horse shoe style bar that wraps around the exposed brick wall allowing them to serve both sides of the bar. The walls were decorated with a Giant moose head and some old school bicycle handle bars. On our side of the bar there were upwards of 15 silver taps serving the four Nano brews along with other Ohio based brews like Market Garden and Fat Head. Both Aaron and I were a bit disappointed that the taps were plain Jane silver tap handles, but I can see why they needed the small nob handles to be able to see over them and interact with the customers.

After being told they were out of the Oh Man Belgian IPA by Nano, I decided to order the Boulder Beer Company's Shake Chocolate Porter. While enjoying this very smooth and chocolaty beer I did try the Nano Harvest Wheat Ale and Lager beer. After one beer, our table was ready back at Great Lakes Brewing Company, so we departed and made the short walk back for dinner.

It seems that my taste was on-point that night, because almost everywhere I went I ordered something that was already kicked. At Nano it was the Oh Man and at Great Lakes it was the  Walking Sticke, which is a German style altbier brewed with local shagbark hickory harvested at Shagbark Farm Ohio. Instead, I had the Engine 20 which is a hoppy american pale ale with smoky undertones. In one night I tasted more smoky beers then I had in the last year. Is this a trending style? I sure hope not, because my taste buds have yet to adapt to the smoky flavor in my beer.

The food at Great Lakes Brewing Company was very good. Susan, our waitress, suggested I try the Cleveland Hero made with pastrami, genoa salami, bavarian ham, muenster, lettuce, tomato, onions, oil, vinegar, rustic italian bread from Zoss the Swiss Baker. Aaron order my second choice, the Cleveland Deli made with corned beef, pastrami, pickles, mustard, muenster, housemade slaw, cuban bread from Zoss the Swiss baker. We both agreed to split our sandwiches so we were able to try both, I think his was better. The housemade slaw on the sandwich was dynamite.

The third and final stop on our beer drinking tour took us out to Platform Beer Company, located North on Lorain and W. 41st. This was a cool brewery that had the Cleveland Cavaliers game along with a long list of craft beers. While I dove right in and ordered the Cherimoya Project with Kafir Lime Aaron and Jenny decided they would play it safe and get a sampler. One of the great things about the craft beer community is how friendly everyone is. While we sat at the end of the bar a gentleman over heard that this was our first time and offered his suggestion of the Key Lime Pie Bomb. Jenny and Aaron had a sample of it, and though it wasn't their favorite beer it wasn't the worst beer either. The rest of the night was spent enjoying the Platform beers and watching the Cavs lose to Milwaukee.

Before heading back to their house in Lakewood we had to stop at Mitchell's Ice Cream. I can't think of a better way to top a night of drinking delicious craft beer other then delicious homemade ice cream. As we walked up and down W. 25th St. you could see all the different kind of bars and taverns serving the local craft beer. The one place we didn't get to that I wish we had is Market Garden Brewery, but there is always next time. My hope is to go back and record a podcast with each of the brewers responsible for Nano Brew, Great Lakes Brewing Company, Platform Beer Company, and Market Garden Brewery. Yes Virginia, the craft beer boom is in full affect, and Ohio is definitely being affected.
Posted by Unknown at 10:00 AM