When I first started writing my beer journal, before starting this blog, I was into Brown Ales. I'm not talking about I would have an occasional brown ale when I was out. No, I would have brown ales on brown ales at home, when I was out, whenever I could get my hands on a brown ale I was happy. I can't explain why, and I don't quit recall when, but at some point my taste buds decided to start enjoying IPAs over Brown Ales. I then moved onto Stouts as well. Needless to say, I haven't enjoyed a Brown Ale in some time. 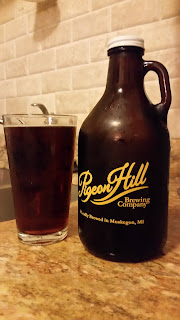 This past Halloween my wife and I went to our friends house in East Lansing for a costume party. My wife was Red Riding hood and I was the Wolf. Pretty last minute costumes, but hey they worked out just fine. The week leading up to the party my friend Derek sent me a text to see if I would be at the party. He was planning on going and wanted to bring me some beer to try and review. He asked if I wanted an DIPA or an Oatmeal Creme Pie Brown Ale. I told him the Oatmeal Creme Pie sounded great.

Oatmeal Creme Pie (O.C.P.) is a Brown Ale by Pigeon Hill Brewing Company in Muskegon, MI. Derek was nice enough to deliver a howler of it to me at the Halloween party and I was able to sit down and enjoy it recently. This beer has re-invigorated my love for Brown Ales.

This brown has a nice brown color and poured with a small white head that quickly dissipated to a small rim around the top of the glass. The aroma was a mix of malt with hints of vanilla and coco. The first taste is a mix of vanilla and coco, very similar to a tootsie roll. It took me back to when I was a kid trick-or-treating and would get a large amount of tootsie rolls. Those were some of the best candy and the Oatmeal Creme Pie brought me back to that time. The Oatmeal Creme Pie has a lite crisp feel at the beginning with a nice smooth finish. Overall this beer was very satisfactory and a great gift from my friend and his girlfriend. This beer has reinvigorated my love for brown ales. I hope to make it up to the brewery some day soon to enjoy this and other great beers from Pigeon Hill Brewing Company.