Thousands of craft beer enthusiasts converged on Riverside Park in Ypsilanti Michigan Friday evening for the first night of the 19th Annual Michigan Brewers Guild's Summer Beer Festival. Featuring more than 100 Michigan breweries and over 1,000 different beers, the Summer Beer Festival was a great way sample beer from breweries you may not ever visit. With temperatures staying in the mid to high 90's throughout the night, it was very important to stay hydrated and cool. There was a lot of congregating around shade provided by the trees or underneath the tents where the brewery booths were located.

I chose this year to stay in the present and not record all the different samples on UnTapped. As a result, I lost track of all the different beers I tasted, but there are a couple that stand out in my memory. 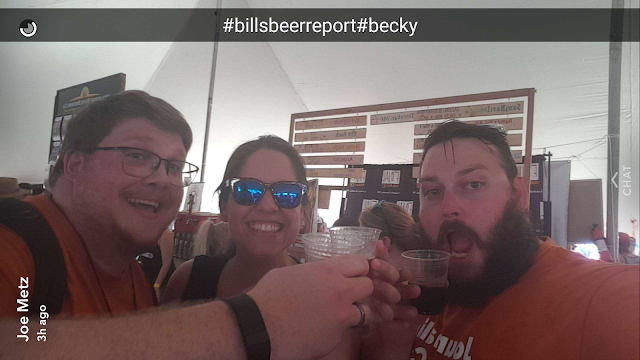 B.B.A. Expedition Stout by Bell's Brewery (First Beer of the Festival)
What do you do with a delicious full bodied Imperial Stout to make it better? You age it in Bourbon Barrel's for a year! At least that is what Bell's Brewery did with there amazing Expedition Imperial Stout to make the B.B.A. Expedition Stout. Coming it with a big 13% ABV, this beer set the tone for the festival. Amazing smooth finish with a flavor that gently reminds you that its an alcohol beer. This one would go quickly, so I made Bell's Brewery my first stop of the festival to make sure I could experience this most excellent beers.

Dr. Jones & the Randall of Doom by Black Lotus Brewery (Most Interesting and Spiciest Beer)
When the head brewer is known for having a spicy randalled beer at ever festival, you have to stop by and see what he did this year. Oh, and Nick the Brewer did not disappoint this year. Coming off his gold medal at the World Beer Cup in the "strong ale beer style" category for their Ninja-Pirate Barely Wine, Nick the Brewer continued his tradition of spicy randalled beers with Dr. Jones & the Randall of Doom. Nick took his People Mover Pilsner and randalled it through coconut curry toffee, complements of Mel's Toffee (, and ghost peppers. The first sip is a nice cool and refreshing feeling, but it soon turns on you as the ghost peppers come to the surface. I really enjoyed this beer, and even went back for seconds. He was able to make it so flavorful with the coconut curry infused with the pilsner, that the heat wasn't too bothersome. I will admit that I felt the heat on my lips for the remainder of the evening.

B.A. Cookies 'n Cream Night Fury by Witch's Hat Brewing Co. (Bill's Favorite)
The Cookies 'n Cream Night Fury was on my top five must tries of the festival. After ping ponging around different booths I finally arrived at Witch's Hat, located at the very back of the festival. This is one I am glad I got to before the crowd arrived, because it was amazing and destined to run out. With a rich chocolate and creamy finish, I can understand where the name came from. With vanilla notes coming from the barral's and the chocolate coming from the addittion of coco nibbs, I say this variant of the already delicious Night Fury is my favorite. While sipping on this sample I met Conner and Matt from Perrin Brewing Company. While talk to them, Matt and I swapped samples. He had the other big contender for favorite beer of the festival, DragonTrax. I thought DragnTrax tasted like the Reese's Coco Puffs cereal. Head brewer and co-owner Ryan is doing awesome things out of Witch's Hat in South Lyon. I need to make an effort to stop by their tap room more often, its only 20 minutes away from work.

Pickle Tink Ale by Schmohz Brewing Co.
Once the gates opened to all the other craft beer lovers, I was joined in my quest to catch them all (beers not Pokemon) by my good friend Joe Metz. He took me to Schmohz Brewing Co. to see if his co-worker was operating the booth. While there I decided to try the Pickle Tink Strawberry Ale. I was very satisfied with my choice. For it being such a hot day, this strawberry wheat ale was cool and refreshing. It reminded me of a strawberry lemonade. Not to mention, its name made me a little uncomfortable saying. According to SKUM (Sigma Kappa Upsilon Mu) who was working the booth, it was supposed to called Tickled Pink until a drinking session convinced them to change it to Pickle Tink. 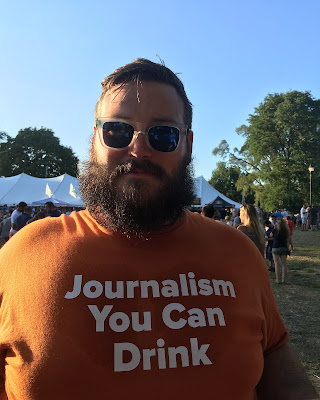