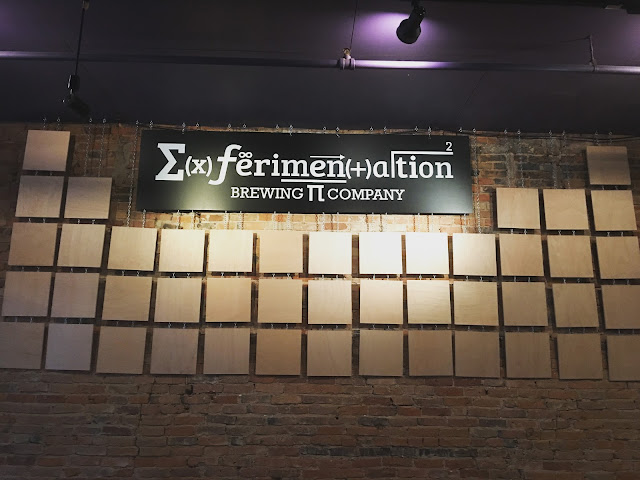 Pontiac, MI - Pontiac is a city on the rise. As far back as I can remember, which is about 10 years in regards to Michigan, Pontiac has been in decline. The Silverdome is scheduled to be demolished, the police department is wildly understaffed and funded, and the downtown was riddled with neglected boarded up buildings. Downtown Pontiac has never been a destination for a night out, the last time I hung out in downtown Pontiac was 2008 when Bay Area Rapper E40 performed at the Crofoot. Arriving in downtown Pontiac you are greeted with construction, as the work to rebuild Pontiac is well under way. Multiple restaurants will be setting up shop in the coming months, including Slow's BBQ. Located at 7 N. Saginaw St. across the street from the new Slow's BBQ, Exferimentation Brewery is the tip of the sword in the Pontiac resurgence. What better way to start a city resurgence then with creative high quality craft beer. 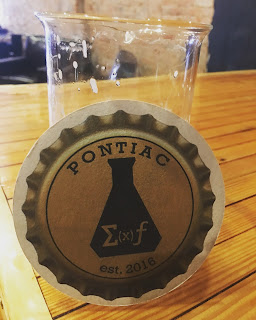 Experimenting with fermentation, Exferimentation Brewery opened its doors July 21st with 6 hand crafted beers available on draft. Owners and brewers Eric, Andy, and Scott are the mad scientist behind Exferimentation Brewery. During our podcast session with Eric and Andy, I had the pleasure of sampling their latest mad scientist experimental beers. The Pucker Sunch, a Lemon Coriander Sour, is a sour with an incredible story. While still brewing at their old facility, an old grenade factory in Rochester Hills, they were initially brewing a different style of beer. After fermentation ended the beer did not meet their standards. Instead of making a donation to the drain gang they decided to age it. They continued to brew and forgot about the aging beer until the move to their current facility on N. Sagniaw St in Pontiac, MI. They poured themselves samples and the flavor of the beer had mellowed out over the aging period. They decided to put it on draft as one of their first experimental beers. After positive feedback from the most opinionated group of people, craft beer enthusiasts, the mad scientists decided that this sour beer will return.

One of the most unique ideas I've seen from a brewing is Exferimentation's mad scientists program. Using their pilot system, experimental brews will be made to be put on draft. The customers will then provide feedback to determine if the recipe will be included as a production beer.  If the masses give it a thumbs up, the recipe will be added the Recipe Periodic Table that hangs on their wall. If their is a negative response they will take that recipe and trash it. My suggestion was to put the recipes that missed their mark into this giant beaker and do a drawing to see which recipe to revisit as time goes on.

I'm excited to see this new brewery flourish. Exferimentation is blazing a trail for craft beer in Pontiac. They will soon be joined by Fillmore 13 Brewery, optimistically opening in the Fall 2016, in the same building. Fillmore 13 Brewery will have a kitchen and they have already worked out an agreement with Exferimnetation to deliver their pizzas to the Exferimentation tap room, which is right across the hall. The Pontiac Revival is in full swing and Exferimentation is doing what it can to make Pontiac great again, one beer at a time.