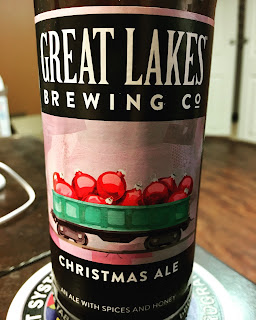 
Thanksgiving has just ended and Christmas is just a couple weeks away. Tis the season for toys and tots, and even toys for tots, but also its the season for Christmas Ales. This weeks Six Pack of the Week is one of the top rated Christmas Ales, scoring an 88/100 on Beer Advocate. Hailing from the home of the Cleveland Cavaliers and the not quite World Series Champions, Great Lakes Brewing Company's seasonal release Christmas Ale is a Winter Warmer coming it at 7.5% ABV. This six pack was purchased from our exclusive sponsor 9 & Hilton Market and is just what the doctored ordered in terms of post Thanksgiving beverage. The Christmas Ale opens up with a beautiful cinnamon aroma with hints of honey and ginger. The flavor profile is mostly cinnamon but there are slight hints of honey, the 7.5% ABV is well hidden. Overall, Great Lakes Brewing Company's Christmas Ale is an excellent spiced beer appropriate for the holiday season. So unless you are your family's cousin Eddie, head on over to your local craft beer store and grab a six pack of Great Lakes Brewing Co. Christmas Ale. Thanks again to Frank and the boys over at 9 & Hilton Market for sponsoring this segment.
Posted by Unknown at 10:20 PM