Microbrewery Opens its Doors in Oxford 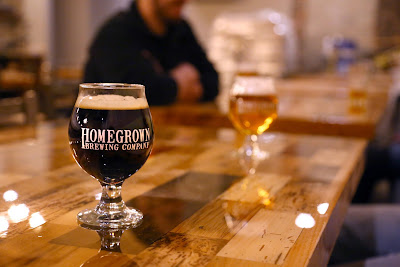 OXFORD, MI, APRIL 5, 2017 - Oakland County couple John and Marie Powers will welcome their first official patrons on April 12th when they open the doors of their micro-brewery, HomeGrown Brewing Company. The Powers have spent the last year renovating the former Veterans Memorial Civic Center in downtown Oxford, and will showcase their range of craft beers and house-made food.
The response from the public has been enthusiastic, with approximately 300 people attending an impromptu “open house” at the end of March, and their mug club pre-sale selling out within days.

John’s passion for creating craft beer evolved after his son introduced him to home-brewing over 10 years ago, so he and Marie - along with their three children - decided to take the leap into professional brewing.

“We love nothing more than to welcome people into our home and share fine food and craft beers, and HomeGrown is a professional extension of this,” said John.

John explained that they want to tone down the exclusivity of the craft beer scene, while maintaining the creativity and craftsmanship found in successful small breweries.

The brewery will showcase 6 flagship beers, as well as two seasonal batches on rotation. The permanent beer menu will include a Cream Ale, a Belgian Wheat, an Australian-hopped IPA, a nutty Brown, a rich Stout, and an original style John’s coined a “Whamber” (a combination of Amber Ale and Wheat styles).

“We will be offering creative experimental seasonal brews, but our flagship beers will really concentrate on the fundamentals of brewing a solid pint,” John said. 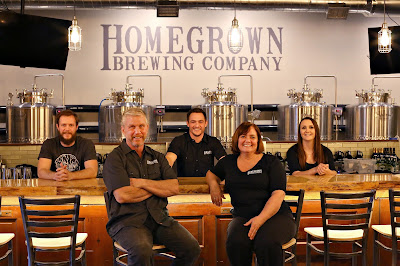 The brewery encompasses cozy lounges with fireplaces, a games area with dart boards, an upstairs bar, and impressive brew tanks on full display. The Powers’ incorporated architectural items from their family farm to personalize the brewery to achieve a warm, inviting atmosphere, which is a key part of their vision. Currently the brewery can host up to 130 seated patrons.

John and Marie keep a hands-on approach, with John as the Brew Master and Marie as the Interior Designer, while their children also bring their skills to the brewing endeavor. Their eldest son, Joe, has returned from Australia to work as Brewer and Production Manager, his wife Kate assists as Media Liaison, Jeff Powers overseas Brand Design and the front-of-house as General Manager, and the youngest sibling Katie Powers leads the Social Media program.

“Between engineers, designers, artists, managers, and journalists – we feel very lucky to have so much collective knowledge in the family - it’s been great to see that transform into a wonderful business,” said Marie.

The Powers family wants to keep a community focus to HomeGrown, with plans for charity taps supporting local works. Drawing from Michigan produce for brewing is high on their priority list.
“We source as much as we can from our own backyard – we use Traverse City hops, Detroit malts, Lake Orion coffee, and Yooper yeast,” Joe said.

A “scratch” kitchen at the brewery is led by chef Clifton Booth, and uses seasonal, fresh, ingredients. Utilizing area farms is front and center as sources of produce and meats. Share-plates, unique salads, house-made breads, and smoked meats feature on the menu and Clifton often incorporates brewing ingredients in the fare.

“We make a delicious beer cheese using our Oxford Ale, and spent grain is amazing in our Sourdough bread,” Clifton said.

Marie said the response from their hometown has been extremely supportive.

“We have already had an amazing response, and we are humbled by people’s generosity and encouragement.”


Readers can follow the progress of the brewery on www.homegrownbrewco.com and on Facebook.
Posted by Unknown at 10:57 PM